The Lady is a fisherman 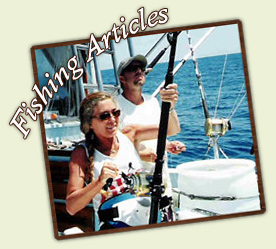 Stack the dock with 32 mahi totaling 500 pounds, six tuna for another buck-twenty, then top it off with a 12-foot marlin and I’ll bet you wouldn’t pick Monica out of the crowd as the champ behind that Hawaiian haul. After all, the word fisherman has just a little baggage. There are the Bubs with creases in the bills of their caps and drawls thick as tobacco juice. There are the pastel sun-shirted flats skippers, steeled by solitude and silent determination. Scholarly fly-fishers, international anglers, Papa Hemingways, the label has been stereotyped, for sure. But it’s hard to peg a fisherman. Take Parker, you could guess that during her March visit to Oahu she posed with turtles on the beach, rode in a glider and stared in awe at the waves. But gutting it out all day in a fighting chair? Monica, born in Miami and now a 20-year resident of Ormond Beach, is “40-something.” She wears flowers in her hair, enjoys landscaping her yard, photography, orchids and is a self described “animal freak.” You could see her riding a wave on her longboard, and in fact, she has a channeled balsa, mahogany and rosewood board and owned a surf shop in Granada Plaza in the ’90s. But she’s not the obvious pick for heaving in a herd of fish.
Is that because the catch is such a formidable task or because you’d expect a man? OK. She didn’t fly to Hawaii just to fish. Her son Chris, who used to work at the Fishin’ Hole in Daytona Beach, lives there. Now Chris, 24, is a deckhand for Chupu Charters out of Haleiwa Boat Harbor. He got her the charter. But Monica is the one who raised Chris on a boat. “A lot of men fishermen think, ‘Oh, a woman angler. They probably don’t even bait their own hook.’ I’ve always baited my own hook,” she said. “I grew up with a fishing rod in my hand.”

Salty as the Sea

We’re not talking fishes-with-the-guys-on-occasion, either. This computer science grad and engineer throws a cast net, ties Bimini twists, attends fishing seminars and wears a necklace with a sailfish chime. “If I could have gills and live underwater, I would,” she said. She skippers a 20-foot Mako 40 miles offshore and has fished the “Fishing Capital of the World” from coast to coast, Panhandle to Keys. “My office at work is plastered with fish pictures,” she said. “Everything in my house is waves and fish.” Monica’s grandfather introduced her to fishing, she said. Apparently it took. Just listen to her description of home: “I live right by a lake with 10-pound bass right out my backdoor and I’m not telling where!” Gene Lytwyn, the owner of the Fishin’ Hole, remembers Monica dropping off Chris for work and trolling the isles for lures. “She’s constantly fishing behind her house,” Lytwyn said. “She’ll fish in the morning before work. She used to go out at night late-night snook fishing, go offshore, she’s game to do any kind of fishing.” 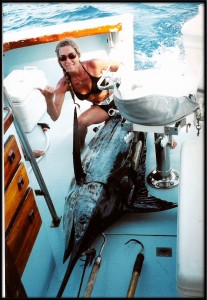 sea with her Captain for the day and Chris working as the deckhand aboard the Foxy Lady. When the marlin bit, they made the most of testing Mom, whom Chris surely vouched for as an able angler. They strapped her in a harness, latched her to the reel and then Chris said, “I think I’m gonna go in the cabin and make a sandwich, you want one?” Monica said, “He went inside laughing and I’m there in the chair and (the marlin) is jumping out of the air. I felt like I was the rock in a slingshot pulled all the way back. I thought I was going to go flying over the back.” The only sympathy she got was when Chris came out of the cabin and said, ‘Hey, Mom, you want me to pour a bucket of water over your head?’.   She fought the marlin for two hours. Her whole forearm bruised from pressing it against the reel. “I’ve never been so proud of bruises my entire life. I showed them to everyone,” she said. “I just can’t stop thinking about that big fish!” 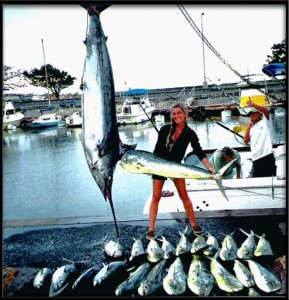